Since the previous post I have found a new way to read books. You may argue that I have had time to find quite a few new ways, possibly even invent some, but there is only the one. And it is the kindle app on my phone. I started out thinking the tiny phone screen would not do, so I installed the app on my iPad mini instead. It is, after all, book sized. But guess what? It only comes along with me when I remember to bring it, much like an ordinary, old fashioned, non digital, paper book. My phone, on the other hand, is never far from my grasp. So it follows that it was not long before I installed the app there too, and that is where I have been using it. It supplies its own very adjustable reading light in tunnels and in bed, and I can customize letter size and line spacing to make reading easier or page turning less frequent.

All the books in my kindle library have something in common. I have decided to read them after reading about them on the internet. The wonderful The absolutely true diary of a part-time indian I wanted more of after reading an excerpt from ndla.no (teaching resource for Norwegian high school), the First law trilogy I read about on my local newspaper online (adressa.no), The Phantom Tollbooth and Walk two moons were in an article shared on Facebook (and apparently impossible to find again) showing what adult books might suit you based on your favorite children's/young adult books, and the absolutely lovely The ocean at the end of the lane was picked up after a colleague posted about it on Facebook. The graveyard book I found all by myself on Amazon after having finished The ocean at the end of the lane.

The genius of digital reading is that my book is always at hand, it weighs nothing extra, adds no handbag bulk (I use lipstick for that), and I actually find it quite pleasant reading on my phone screen. If you have read my post about audio books, you know that I like to feel and smell my books. This of course is a missing element also with Kindle books, and is a small drawback. (But my phone feels nice. And it is pink. And green. Which always helps.) The major drawback, however, is that none of these books are "lending enabled", so I can only talk about them with my friends, not actually hand them over for them to enjoy. And I paid for them. I own them. I should be allowed to do with them whatever I damn well please! Shame on you, Amazon.

(Note: This post is apparently in English. I assume that is because all of the books I have read on my Kindle app are in English. I have not checked the selection of Norwegian language books for it.)

Email ThisBlogThis!Share to TwitterShare to FacebookShare to Pinterest
Labels: english

Email ThisBlogThis!Share to TwitterShare to FacebookShare to Pinterest
Labels: anna, off topic

This book I bought on a whim. I had to order some new books from amazon. Or reorder, really, since some book loans sometimes extend themselves into gift giving, and I like to have a small library at work to share with my students. As I was finishing up my order of well loved familiar books, I saw this one advertized. It looked interesting enough, both the levitating girl on the cover, and the description:

A mysterious island. An abandoned orphanage. A strange collection of very curious photographs. Fiction is based on real black and white photographs.

The plot is catchy. It had me in its thrall immediately, but what can you expect when it is about a troubled teen finding himself struggling with monsters and impossible peculiarities, I love that kind of stories! I also love the photographs, although these are perhaps also the major drawback of the book. They come from museum collections, and Riggs has looked through them finding the strangest ones. Sometimes, though, it just feels like he writes parts of his story to make an image fit in. In these instances the story feels strangely constructed and fake. I liked the rest of the book, and the actual photos, enough to be able to forgive this, though. I particularly liked the ending, and this is not very like me. I am a sucker for the beginning of fantasy books, I love being allowed to get to know a new fictional universe. I often enjoy exploring the setting more than I enjoy the actual plot. This time, though, both are equally captivating.


As you can probably tell from the image, my book is a large print edition. This makes it an easy read. The language isn't too complicated either, and this book should suit most young adults, given that they enjoy non-realistic fiction. There is however *possible spoiler alert (white letters - mark the text to read it)* some time travel logic that needs to be followed, and that can, as you may know, be slightly complicated. I enjoyed this book very much, and wholehearedly recommend it!

A song of Ice and Fire (George R. R. Martin)

You may have picked up that HBO is making a vastly popular tv series that is called Game of Thrones. It has beautiful princesses, smart dwarfs, pure evil, sweet children, and nasty ones, dragons, knights, magical swords, love, war, and oh, yes, sex, and is based on George R. R. Martin's now 5 books long series A song of Ice and Fire.

This is however not my first meeting with Martin's vast fantasy world of Westeros (and the lands beyond the sea). My first meeting with it was years and years ago, playing the boardgame (which I found horribly boring, as I don't particularly enjoy strategizing), and hearing some of the other players talk about the books. Finally, maybe about a year or two ago, I got to know them as well. As audiobooks. And I fell in love. They are every bit as fantastic as everybody said back then. I don't even know where to start to give you an idea of what they are about. There are so many characters, and so many storylines. The books do however follow some of the powerful families of the Iron Kingdoms. We learn the stories and ambitions of some of their members, we follow their strategies in their struggle for what they want, be it love, power, wealth, or justice.

To cover all of this (so far published) material, poor Roy Dotrice has had to read 201,5 hours for the audiobooks. And still there is more to come. Apparently, Martin planned for there to be fewer books, but then there was so much that needed to be told. According to wikipedia he is writing two more.

If you are at all interested in fantasy literature, let me just say: do yourself a favor and read (or listen to) these books if you haven't already.

This time I am treating you to the trailer for the tv series rather than a picture :)

So, is she dead or what? No, she isn't, she's just been busy. Life you know. And, actually, reading. Yes, busy reading. This has happened several evenings now, that I have found myself not turning on my xbox, but rather grabbing for a book. Very odd indeed. 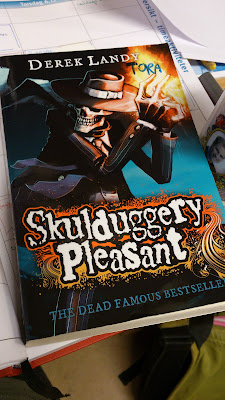 Someone who actually is dead, though, is Skulduggery Pleasant. He is however even busier than me. And also quite odd. He is, in fact, both a skeleton and a detective. I found out about him researching literature that might suit the male population in my classes. In general, girls like reading more than boys do, and language teachers are more often female than male. This means the the books we suggest to our students, perhaps tend to suit the tastes of girls a little better than those of boys. So, I looked for books for boys. Imagine my surprise, then, when I started reading the first book about Mr Pleasant (Scepter of the Ancients), and the main character is 12 years old Stephanie. A girl. Wouldn't boys like a book about boys? Perhaps they would, but I would very much advise them to give Skulduggery and Stephanie a chance.

Stephanie inherits her uncle's huge house, and, staying there alone because of a storm, meets a completely new reality, of which the living skeleton detective is a part. This book isn't very difficult to read. It has fairly large letters, the language isn't very complicated, and it is very exciting. I just had to keep reading to see what would happen next. And that is, I think, what many young readers are looking for. Excitement on pretty much every page. Or, at least every second. If this is what you are looking for, give Skulduggery a try.
Posted by Tora at 1:50 PM No comments: 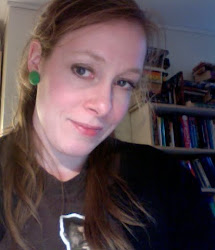